4 août 2016  :  (QNA) – The Qatari flag was hoisted in the Olympic Village in Rio de Janeiro where the Olympic Games will be hosted this month.
HE Sheikh Joaan bin Hamad Al-Thani, president of the Qatar Olympic Committee (QOC) and head of the Qatari mission to the Games, attended the ceremony, which marks the official entry of the Qatari mission to the village.
HE QOC Secretary General Dr. Thani bin Abdulrahman Al Kuwari attended the ceremony as well along with Mohamed Issa Al Fadala, head of the administrative delegation of the Qatari Olympic mission, and a number of federation presidents, executives and Qatari athletes.
The ceremony started with the entry of the Qatari delegation in front of the flagpole, where the Qatari national anthem was played, followed by Brazilian traditional performances. The village mayor also gave a welcoming speech for the Qatari delegation as Al Fadala took the stage.
Qatar takes part in the Olympics with its biggest ever delegation since its participation in the Los Angeles Games in 1984. The delegation comprises 38 athletes representing 10 federations. The Qatari participation in the games kicks off on Saturday with the qualifiers of swimming, table tennis, boxing, volleyball and beach volleyball.  (Photo QNA) 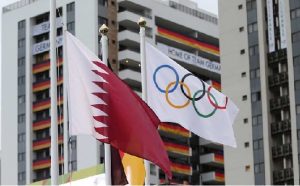